Anybody remember GM - The Independent Fantasy Roleplaying Magazine? It was set up by Tim Metcalfe, Paul Boughton and Wayne (yep, just Wayne!) and according to the first issues editorial was an antidote to 'in house' magazines of the time (White Dwarf perhaps?) and intended to show everything that the fantasy roleplay scene had to offer. Issue number 1 came out in September 1988 and ran for 19 issues (oddly split into two volumes with the first 12 being volume 1) until March 1990 when it suddenly ceased production. The gang went on to produce Games Master International - The Independent Fantasy Gaming Monthly a little later that same year.

Starting at the beginning

I decided to set up this blog purely for the nostalgia for one my favourite gaming magazines that I used to buy when I was a kid back in the late 80's/early 90's. I made a post on my other blog (stone cold lead figure painting) a while ago after I'd re-collected all of the issues of GM but wanted to do a little more than a one off post. This blog is that little bit more. Here's a good chunk of that original post to give a little flavour.

I found GM in 1989 with the March issue, Vol.1 No.7 which it seems surprisingly enough was the same month I started buying White Dwarf (issue 111). I guess they must have been on the same shelf at the newsagents. It was really interesting to see that a world of gaming existed outside of Games Workshop, although I'd hardly been into 'The Hobby TM' for long enough to be totally indoctrinated into a GWombie (maybe more of a 90's onwards phenomenon anyway). I bought every issue after that one and was gutted when it just disappeared the following year.

In the late 90's prior to me going to university I had a bit of a clear out and threw away all my magazines, including all 15 issues of Games Master International and around 50 issues of White Dwarf. Really wish I hadn't but then that's why we have Ebay today! Had a bit of a pang of nostalgia the other week, did a quick search and found a job lot of GM magazines, 18 out of the 19 and another seller who had the missing issue. Got the job lot for a mere 99p! Postage and the single issue cost a bit more of course but it all worked out as still being a bargain price in my mind. Most of the mags are in good nick, a couple are a little tatty and one has a bit of water damage but I can't complain for the price.

It's fantastic looking back on these and especially the first six issues that I missed. A real window back into a different age of gaming. I suppose in some ways some of it is familiar as GW are still here and games like Battletech and various RPGs are still around but there's a lot that's very much of the time. Adverts for interactive phone line games like Steve Jackson's F.I.S.T. are a bizarre concept today. There were also a huge amount of Play by Mail games as well. I remember playing three PBMs in the 90's, Kingdom by Sloth Enterprises, then later I moved onto A Bledian Diary and Dieu Et Mon Droit. Computer gaming was still largely at the point and click stage. Oh, and so much live roleplay back when it was still LRP rather than LARP (why add the 'A'?). General gaming issues of the time seemed to be GW and their influence (some things never change), and religion versus roleplaying.

There were some great articles including Paul Benson's The Paint Shop featuring some of his lovely old school paint work, Reader's Miniatures which I wish had been a larger section, and in later issues a series of short articles called Historical Alternatives. These covered different historical eras and provided an introduction to something other than fantasy/sci-fi. There were also RPG scenarios and one in particular that stuck with me, it was called Infernalia and covered adventuring in Dante's vision of Hell. Some years later I bought the Divine Comedy based purely on that scenario, I only read Inferno and part of Purgatorio though.


Anyway, with the introduction out of the way let's kick off where it all began with Volume 1, No. 1. I've done my best to scan a few choice pages but they're not perfect as GM is slightly bigger than A4 so it doesn't quite fit on my scanner which does result in a minor bit of page cropping and blurring. You can see the important bits though and that's what really matters.

You can't beat a bit of iconic Dragonlance art for a front cover. 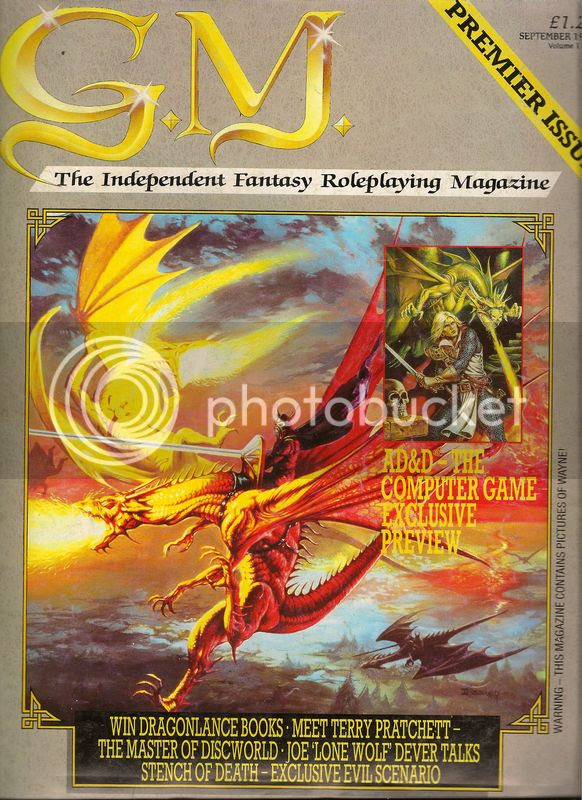 The editorial in typical aneurysm inducing colour. Although maybe not as hard on the eyes as some later background colour choices. 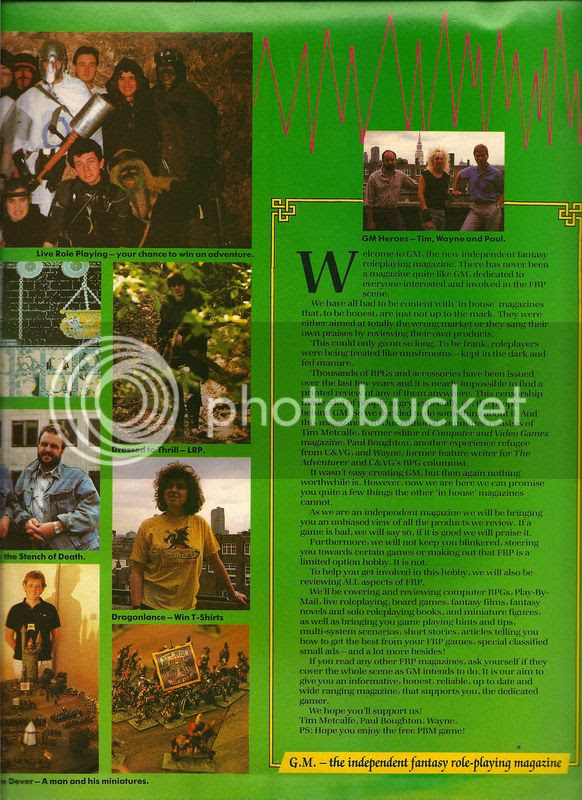 Couldn't resist posting a little something from the news section. Being very much obsessed with Games Workshop of old that little highlighted tidbit is somewhat interesting. 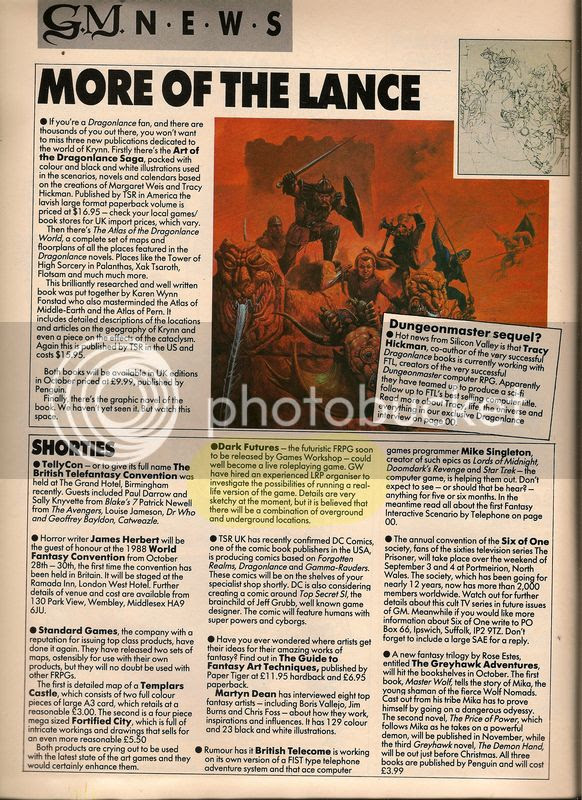 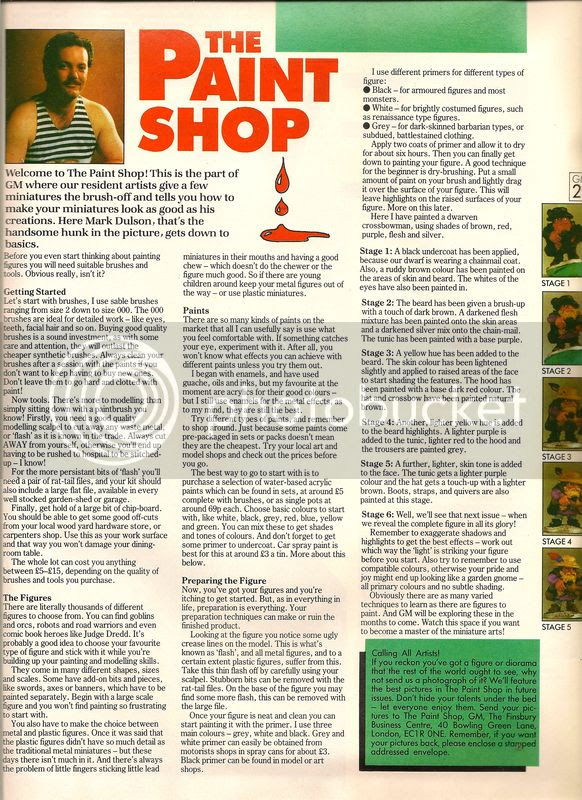 Onto the meat of the magazine next with an interview with Joe Dever. 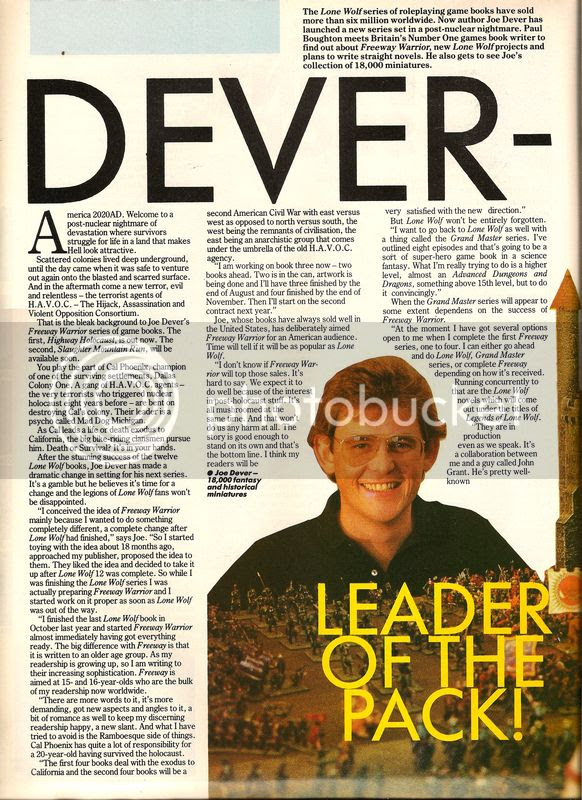 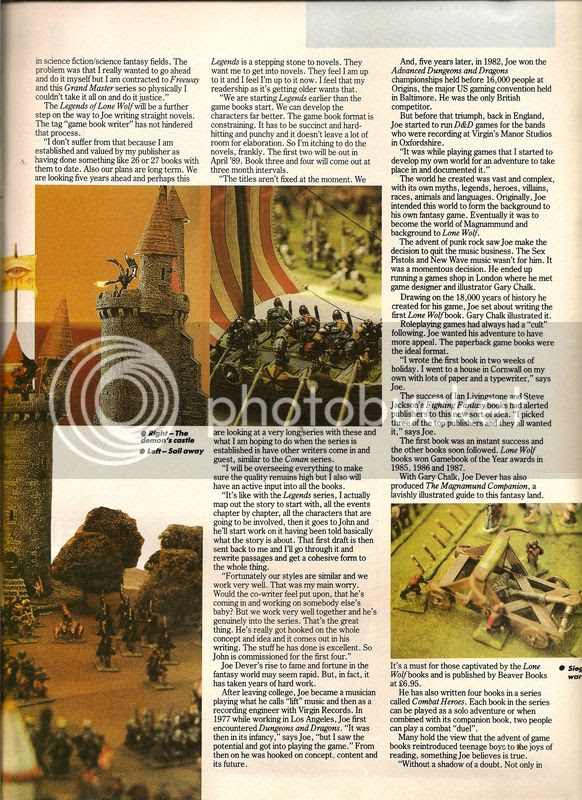 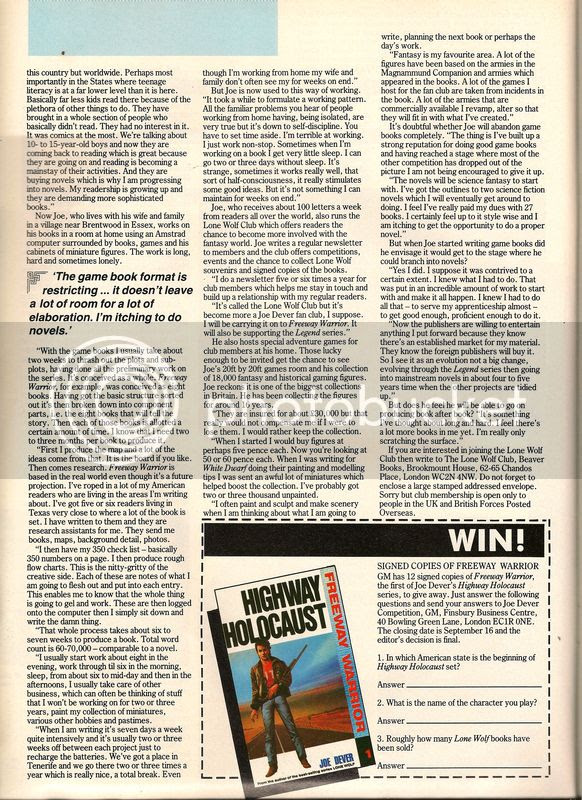 A little interview with Terry Pratchett. 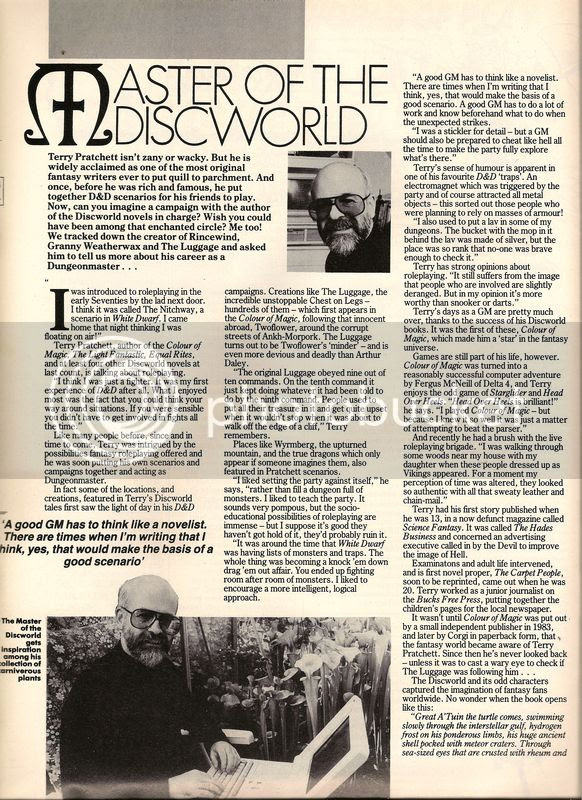 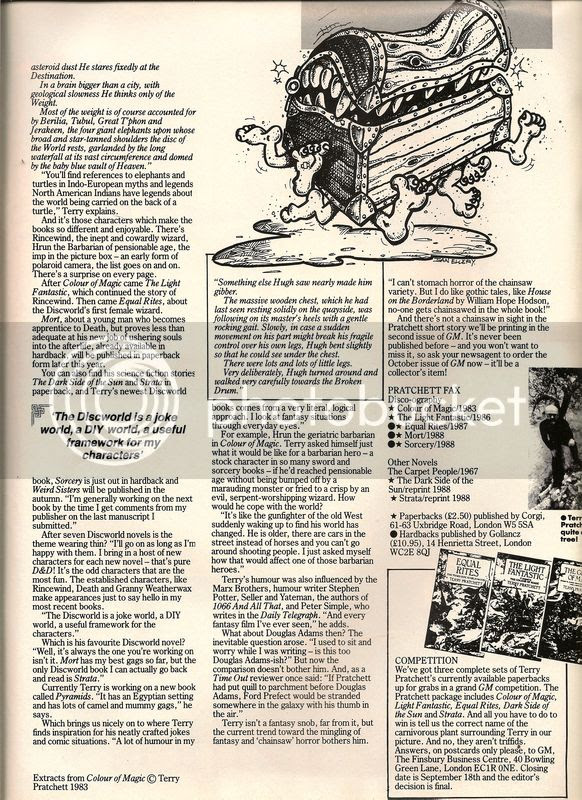 There's a systemless fantasy RPG scenario that I'll add later. It would have gone here but I missed a couple of pages out in my hurry to scan things. There's also a fairly large article by the marvellous Wayne all about the different aspects of gaming aimed at beginners. Not a bad start though. More to come depending on how temperamental my scanner is.

Full size images of everything can be found HERE.
Posted by stonecoldlead at 16:38 5 comments: